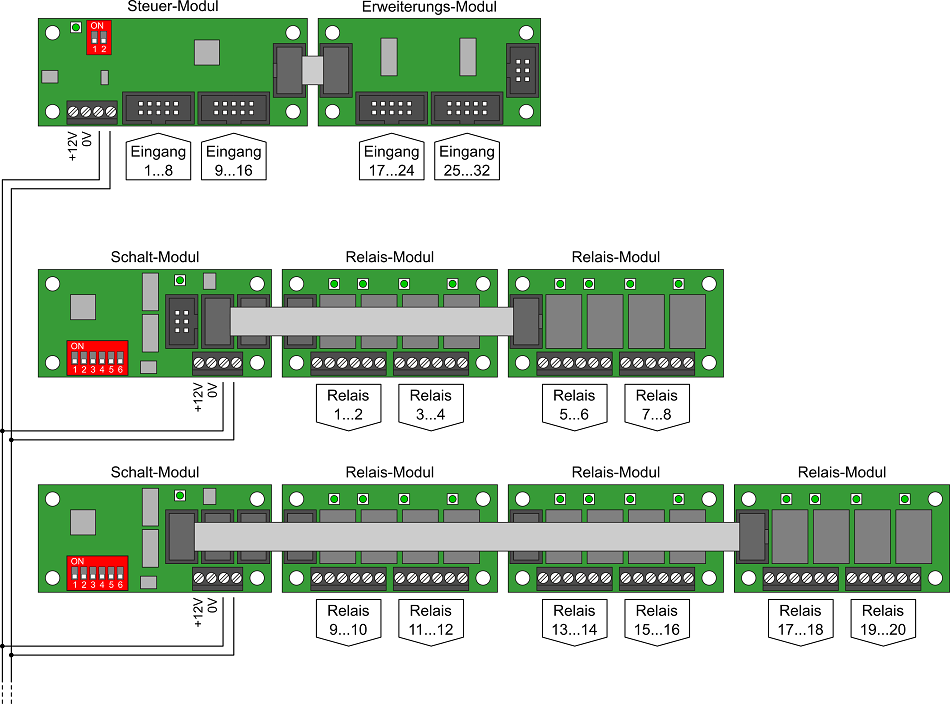 The MD mXion SSB64 replaces large cabling with only 4 wires. With conventional cabling of model railway systems, all wires are usually pulled individually from the switches in the control panel to the point at which the switching function is required. So all switchable track sections, Switches or signals with individual wires can be connected, which are led to the furthest corner of the system. Every model railroader is familiar with the resulting thick bundles of cables and multi-pole plug connections. Troubleshooting such cabling is time-consuming, as every wire has to be traced through the entire system. The serial switching bus SSB64 replaces this parallel transmission of switching information via individual wires with a two-wire cable. In this, the information about the switch positions is transmitted one after the other, i.e. serially. This happens so quickly that there is no time lag between switching and the reaction is noticeable in the system. You can find more information in the . 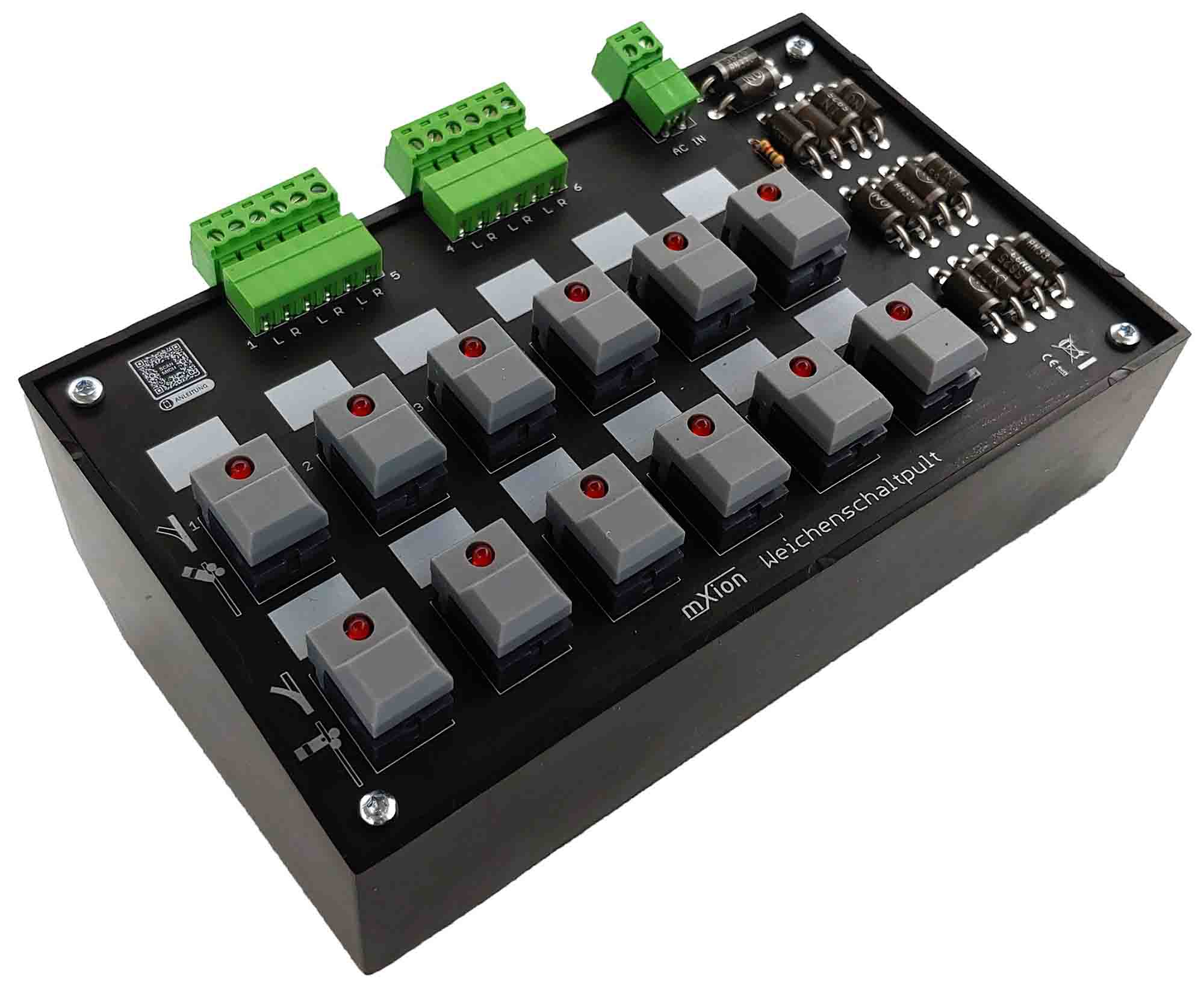 The MD mXion With 6 outputs, the control panel offers the possibility of switching traditional points and accessories. The control panel can be loaded with 5A per output. The buttons with a good pressure point indicate via LED when the button is pressed and the current flow is correct. It becomes AC power to operate needed. For this we offer our mXion WSC, which converts up to 5A direct current into alternating current. A suitable power supply is included. The control panel can be used to switch point machines, uncoupling tracks and signals and much more. be used. You can find more information in the . 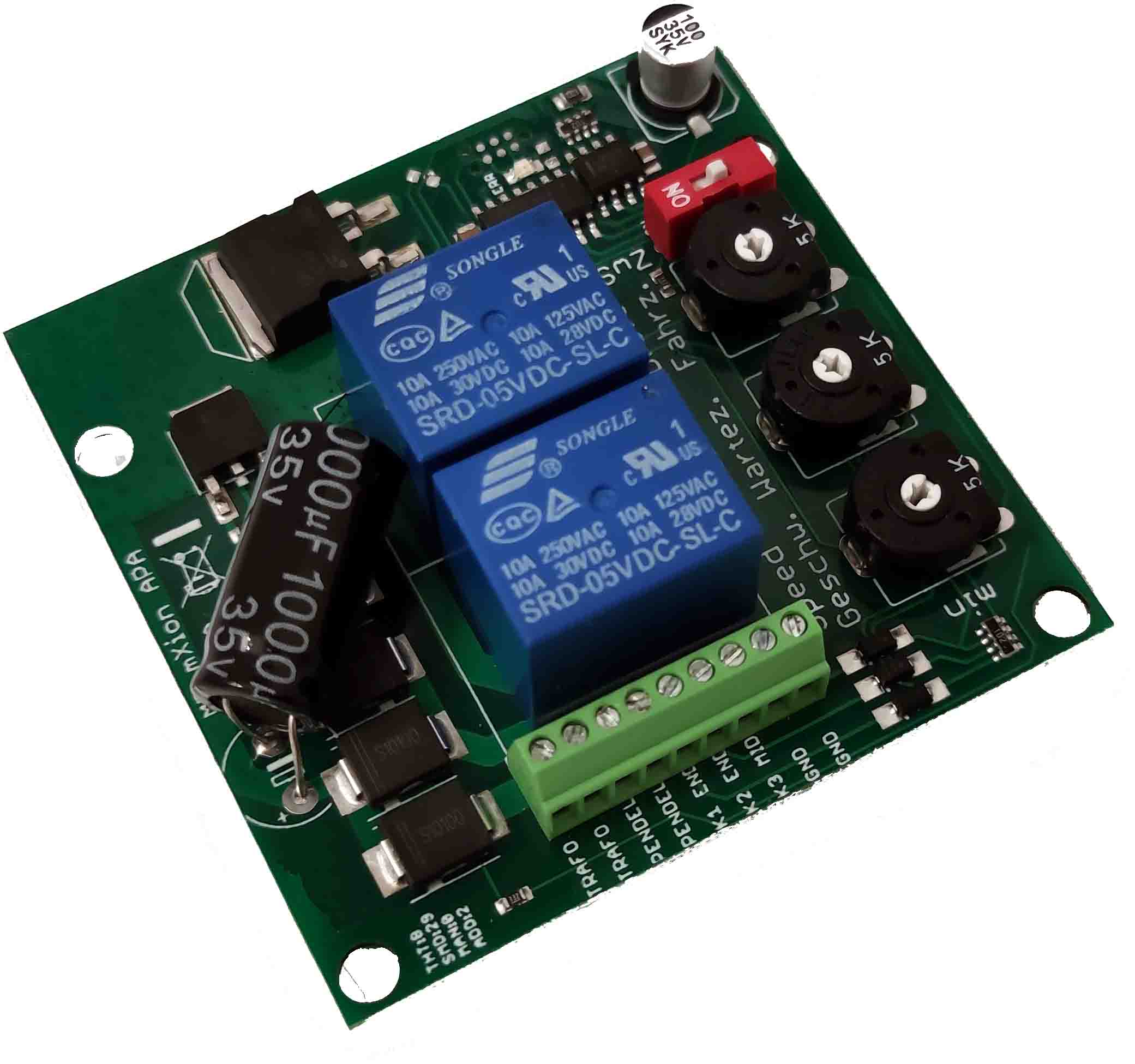 The MD mXion APA is the all-in-one solution for analog pendulum controls. The APA can deliver up to 5A output current and offers smooth starting and braking of the locomotives. The times can be set digitally, as can the switching of the pendulum function. Next With the pure time control, control via contacts is also possible. The APA also offers an intermediate stop function. The integrated POTI can be used to set not only the holding time but also the travel time (if not via contacts) and the speed. Consequently one is independent of the applied voltage. In addition to DCC, the APA also controls Motorola. You can find more information in the . 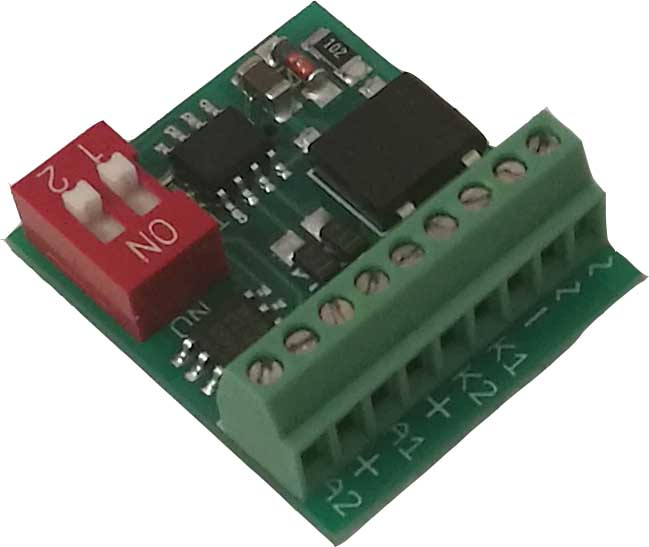 The MD mXion KLI is a universal switch mode module. It can be used as a switching amplifier or light imitation module. Choices include: fluorescent imitation, kerosene lamp imitation and (boiler) imitation of fire. The individual modes can be set separately via the red switch. Particularly suitable for lighting model houses or railway cars. For details, see the . 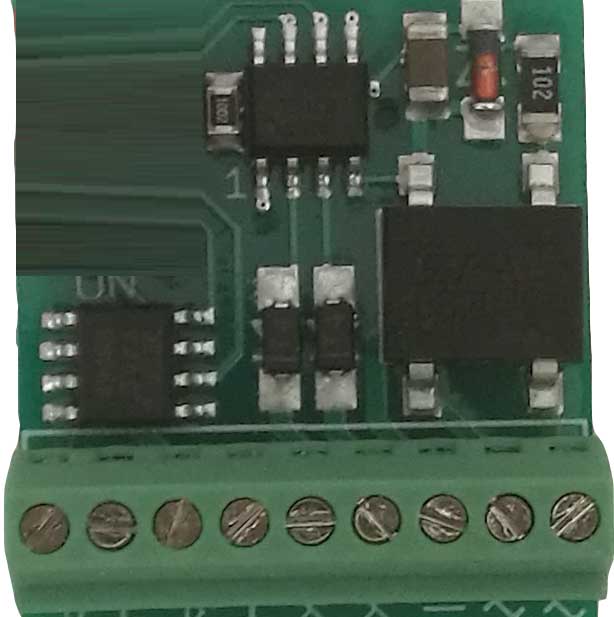 The MD mXion KLM offers five channels, which undergo a pattern alternately. Thus, this module is suitable for light effect tasks, especially fairground booths. Through the five channels can, for example, five small fairy lights on one Kirmesbude or a ride with this module will be switched. For details, see the . 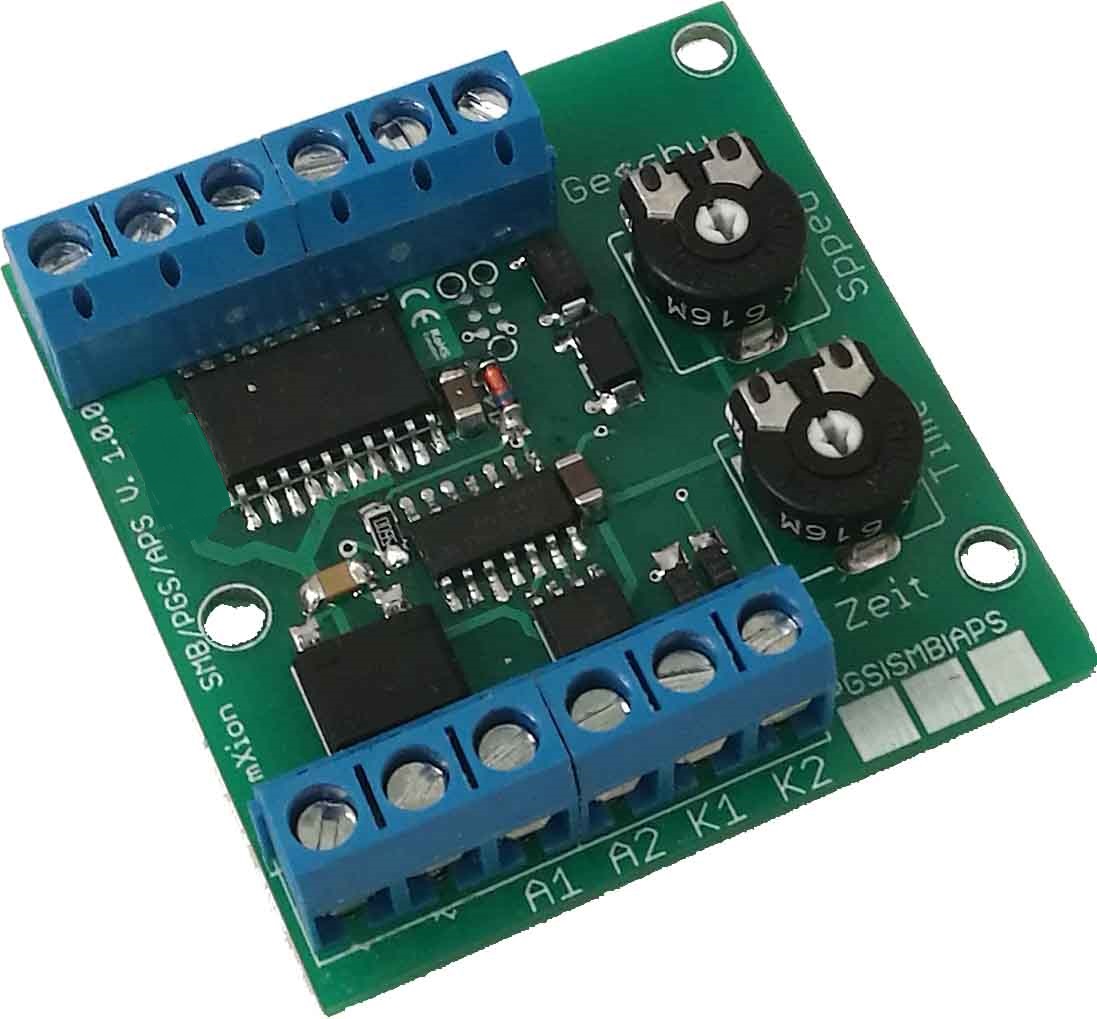 The MD mXion PGS is a pantograph control module. It can control 2 pantographs with normal engines through its 2 engine outlets. The control is carried out via 2 contact inputs, which can be optionally switched via a decoder. The module can also be used for analog operation by connecting the contact inputs to the track. The speed and the travel / switching time is conveniently set via potentiometers. The pantographs are independently controllable. More details can be found in the .

The MD mXion SMB offers the possibility to automatically control the electronic track cabinet systems on your model railway system via a light barrier or switch contact. This is done by 2 contact inputs which determine the incoming and outgoing train. Furthermore, a realistic flashing light with 2 function outputs for the St. Andrews Crosses is given again. For details, see the.

The MD mXion APS is a 2-channel pendulum control for all tracks. Optionally, you can combine both channels to get 2A power instead of 2x 1A. The driving and holding time can be easily adjusted by potentiometer. Optionally, the limitation can also be the 2 integrated contact inputs (eg Lokmagent or Reed). During pendulum operation, a flashing light is given again on the two function outputs. For details, see the . 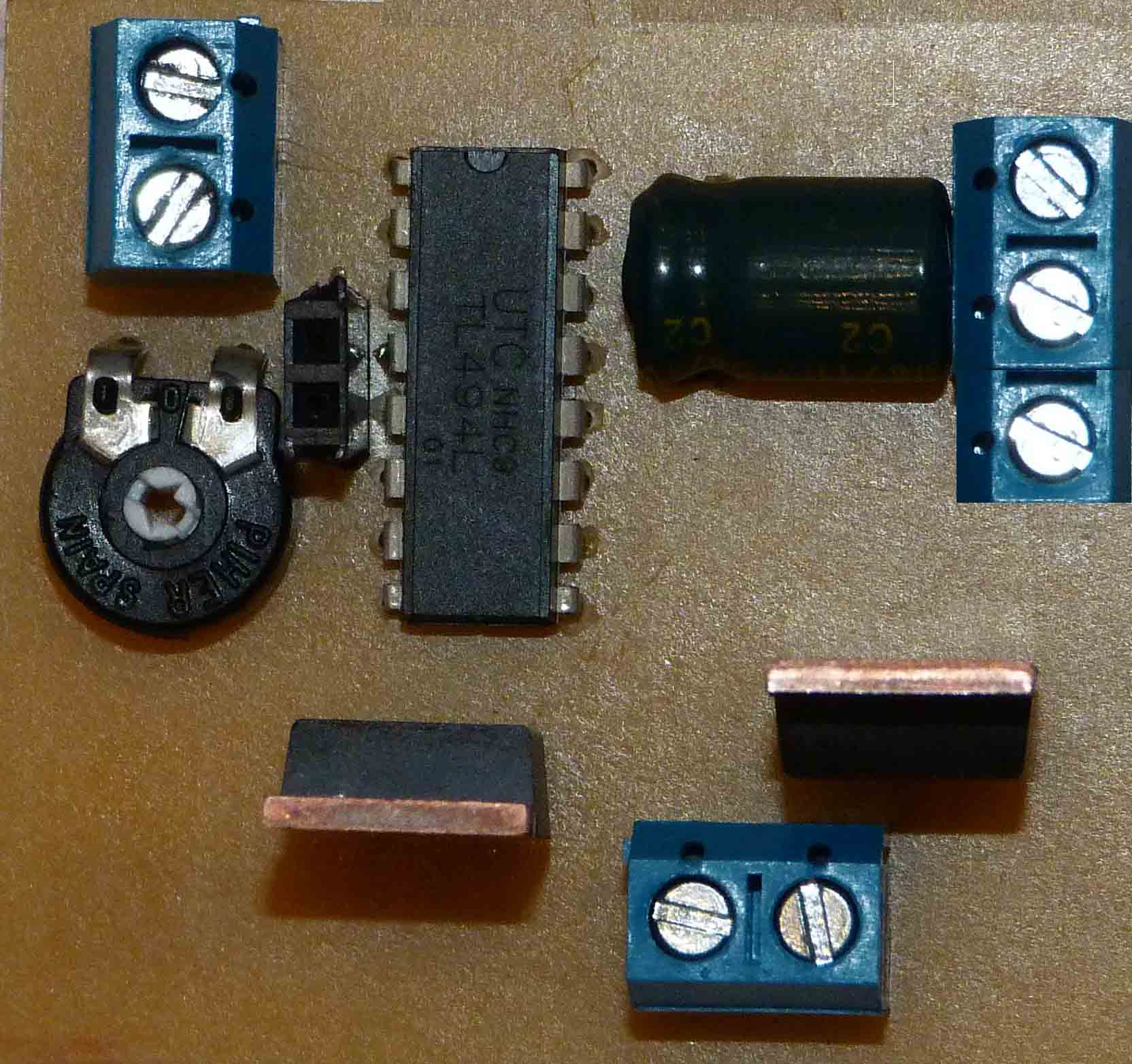 The MD mXion DLM can be used as a lossless dimmer for the model railway area, as well as in discotheques or at the fun fair / amusement park as a strobe light generator. The strobe speed can be adjusted. For details, see the . 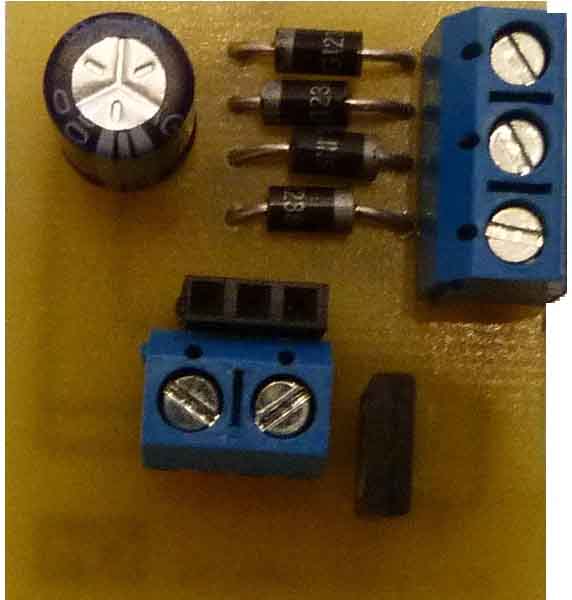 The MD mXion TLD is a pure dimmer module. It can optionally dim with or against the brightness. For details, see the . 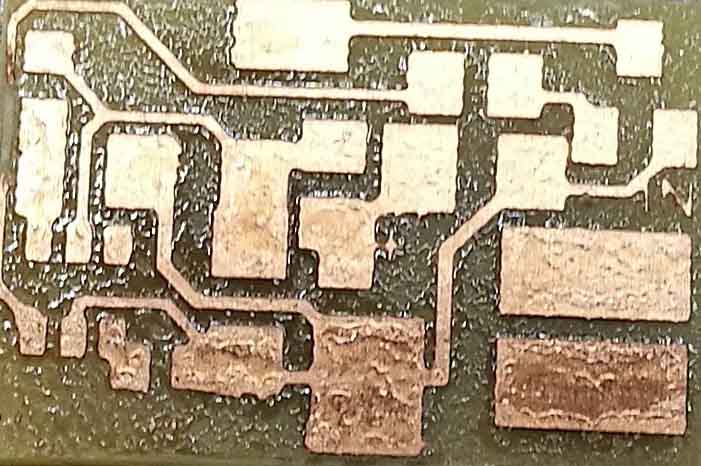 The MD mXion SLIM is our smallest module. It combines the functions of the KLI (neon and petroleum) as well as the brightness control and dependency of the TLSpro on a function output. It is only as big as a 10-cent piece and thus has enough space in all models to simulate petroleum or neon flares. Ideal also for steam lanterns, cars, houses and much more. For details, see the . 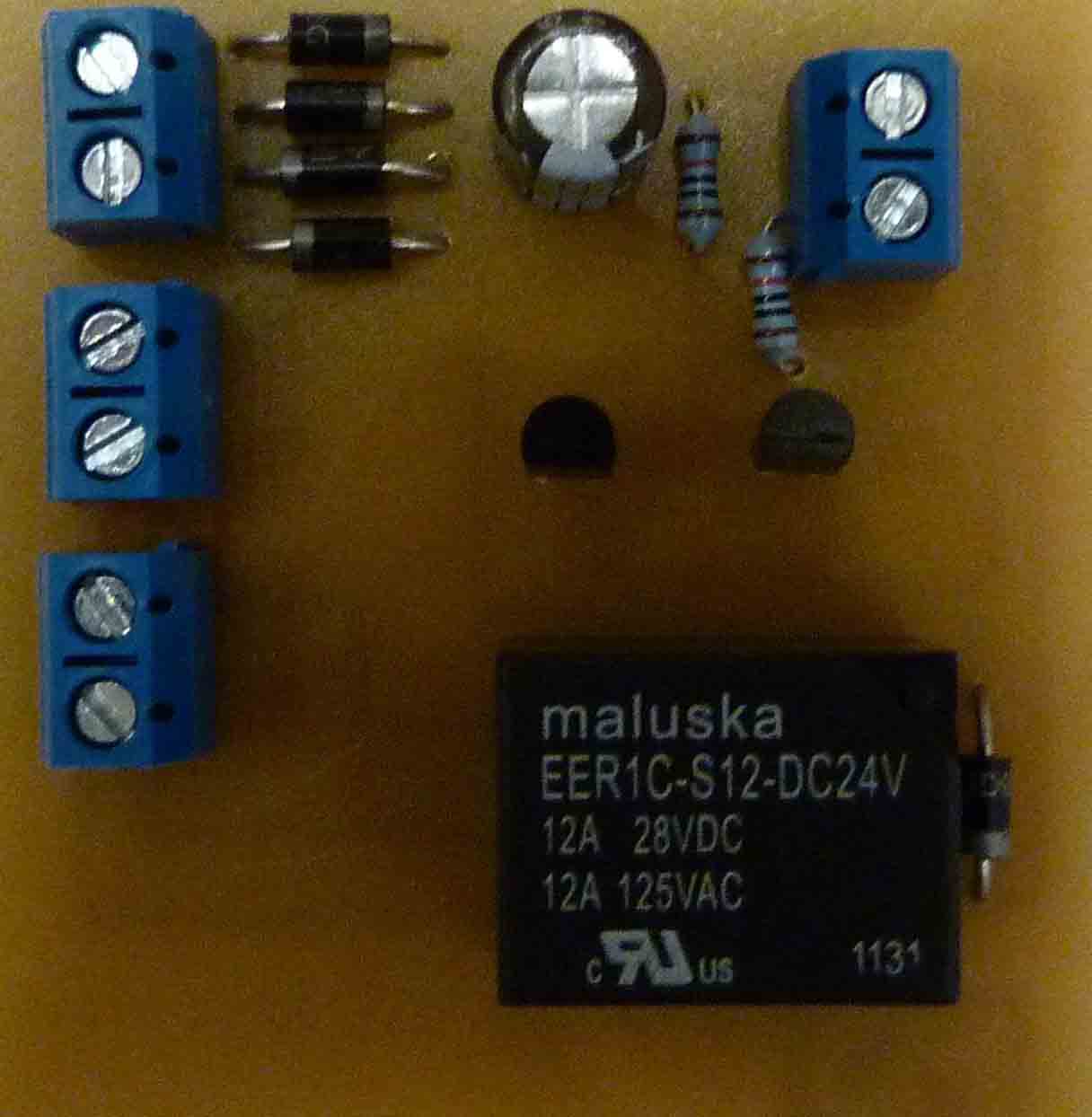 The MD mXion TLS can be used as a dimmer switch with its brightness sensor and the changeover relay. Automate your model railroad layout and let your lights turn on automatically at night. For details, see the . 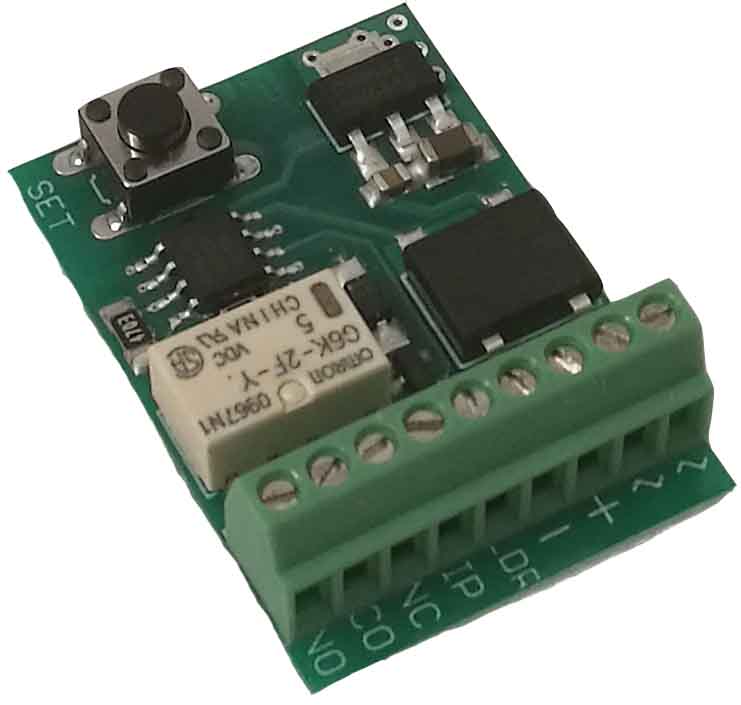 The MD mXion TLSpro represents the further development of the popular TLS. The advantage of the TLSpro is that the brightness threshold and mode can be set separately. The size could be reduced by more than 50%. Functionality also corresponds to that of the TLS. For details, see the .