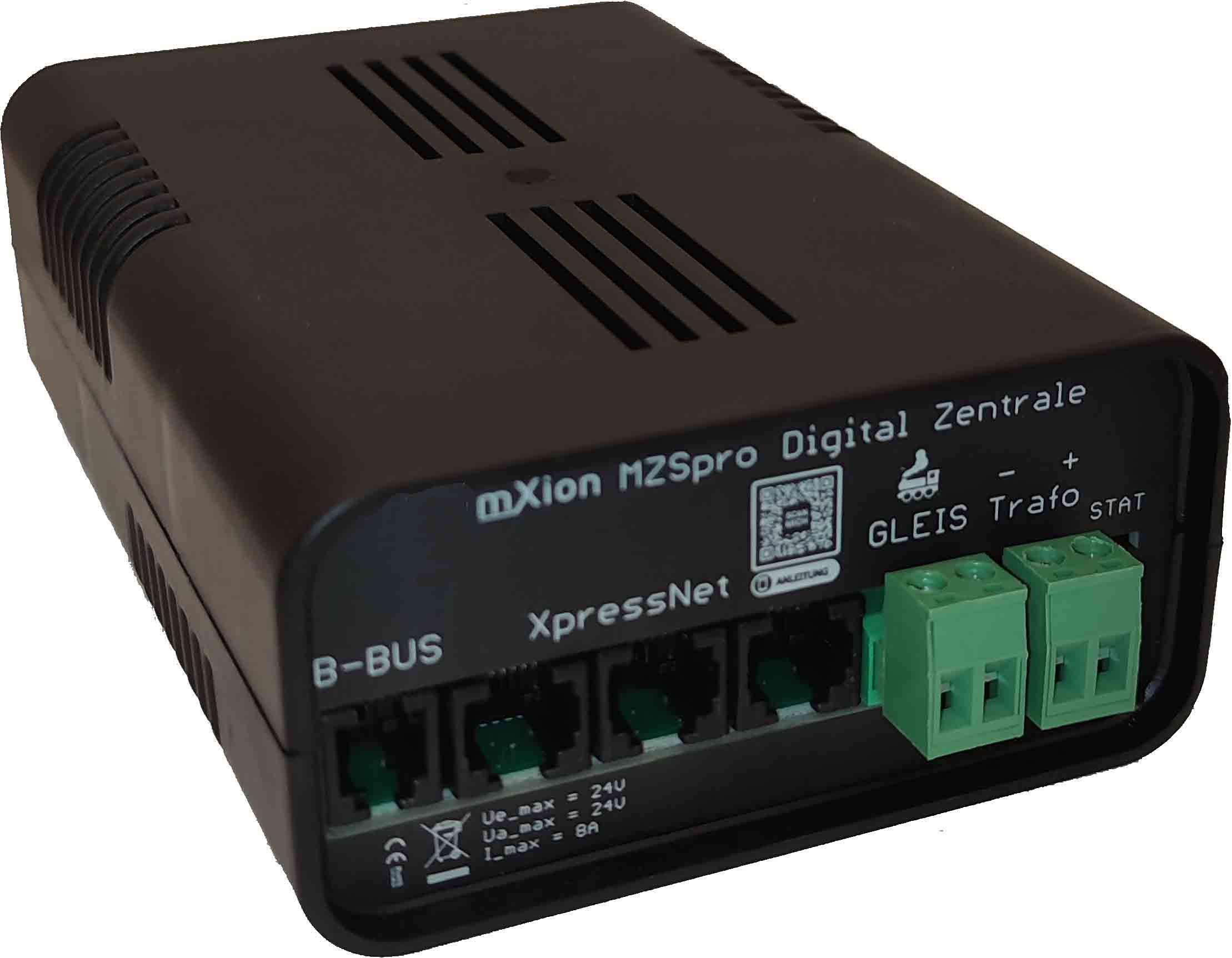 Der MD mXion MZSpro is a very powerful and at the same time compact and easy-to-use digital control unit with 8A power spectrum. The MZSpro multi-train control speaks the widely used DCC protocol and can therefore be used by all major manufacturers. Through the open XpressNet bus is the Central powerful and user-friendly set up at the same time. You can choose from a variety of existing hand control devices (recommendation MultiMaus). The integration of other bus modules is also possible. The center has the possibility to control up to 10239 locomotives, F0-F68 and 2048 turnouts. It is even a point position memory included - on the manual control unit always the last switched position / direction of the switch is displayed and live connected. Up to 50 locomotives can be controlled and stored at the same time (speed levels 14, 28 and 128 possible). In addition, the central office offers the possibility of Wi-Fi and Retrofit radio over our adapter, so that the Z21 App and the MultimausWLAN can be used for control. The app displays all measurement data. An ext. Router or unlock code is not needed. For details, see the . 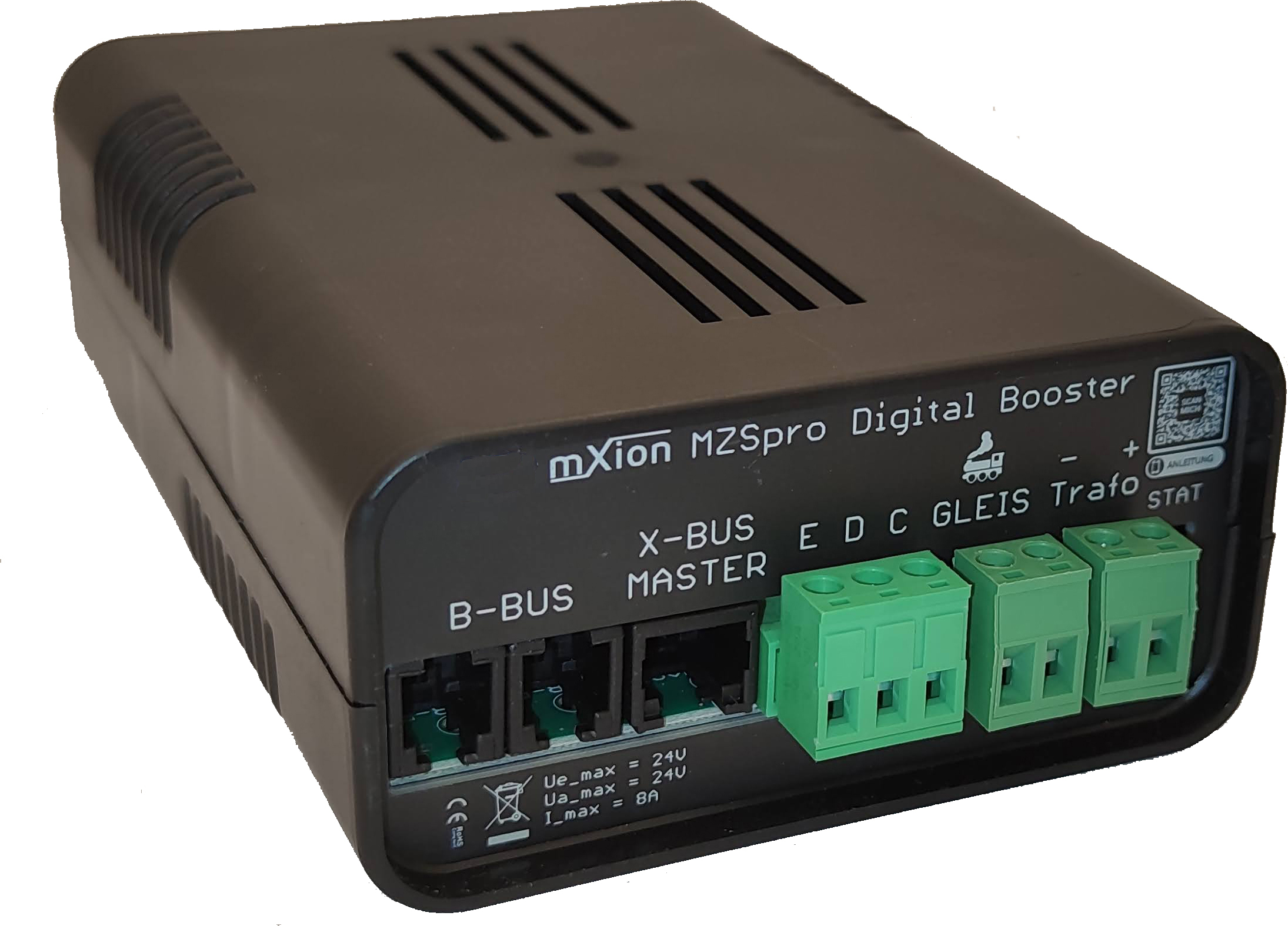 The MD mXion MZSpro Booster is an extremely powerful booster with up to 10A short-time peak current. The booster supports all protocols (DCC, Märklin-Motorola, mfx, Selectrix, etc.). It is also possible to adjust the short-circuit current, short-circuit time and RailCom. Only the blanking interval is generated for RailCom. In addition, the booster can be supplied with signals from many sources (XpressNet, B-Bus, CDE or directly from the track). The settings are made via CV programming. The 2 status LEDs show the status of the booster at all times. There is also feedback to the head office. It is also possible to switch the booster on and off using a switch command. For details, see the .

The MD mXion 30Z is our strongest and at the same time best headquarters on the market. In addition to the 30A track exit, the 30Z offers a separate programming track with 3A, which can be connected to the main track by insulation to enable an exit point. The 30Z also offers a large display shows all important parameters and a sophisticated menu navigation which enables settings to be made directly on the device. A special feature is that the 30Z supports all common bus systems (LocoNet, XpressNet, S88, RS-Bus and USB) as well as all common protocols (DCC, Motorola, Selektrix). Likewise can Automatic functions can be activated, which enable the control of processes without a PC. Model railway time with an adjustable factor is available as well as various options for short-circuit detection and monitoring. WLAN with z21 protocol as well as RFM radio is built in for wireless control. The 30Z is fully z21 compatible and supports the Massoth-DiMax USB protocol. Over and under voltage protection is also implemented. Up to 100 locomotives can be controlled and saved at the same time (speed levels 14, 28 and 128 possible). It is also possible to control an analog locomotive. The control center is able to control up to 10239 locomotives, F0-F68 and 2048 turnouts. The integrated WLAN makes it possible to use both WLANMAUS and the z21 APP.For details, see the .

The MD mXion 30B is an extremely powerful booster with up to 30A short term peak current. The booster supports all protocols (DCC, Märklin-Motorola, mfx, Selectrix, etc.). Thanks to the built-in display, all values such as connected voltage, current, temperature etc. can be monitored become. It is also possible to adjust the language, short-circuit current, short-circuit time and RailCom. For RailCom, only the blanking interval is generated. In addition, the Booster can be supplied with signals from many sources (XpressNet, S88N, CDE or directly from the track). It is even possible in XpressNet Combination with the Roco Multimaus to build a complete head office. To do this, the Roco Multimaus must only be connected to the Booster-XpressNet master. Additional XpressNet devices can be connected via Y-splitters and 4-pin cables. The 30B is enough to supply the complete system. For details, see the .

The MD mXion XP-MULTI is a universal WLAN / wireless functionality that can be used universally for every XpressNet and LocoNet-capable central unit, so that you can control any XpressNet or LocoNet-capable central unit wirelessly via the Z21 App or MultimausWLAN. Furthermore, you have the option a fully automatic PC control with RocRail (or Z21 capable software) to be able to make. All functions and programming (POM and programming track) are supported (if the control panel supports it). Enjoy limitless freedom via app or multi-mouse WLAN at your central office. Ideal for our 30B Central Station Wagon. Furthermore, the MULTI can work as a translation module between LocoNet and XpressNet, so that it is possible to operate LocoNet-capable devices on XpressNet and vice versa. For details, see the.